WILL UBS LOOSE IT’S US LICENSE?

ABC News reports: “In court documents, federal prosecutors say UBS bankers helped set up many of the secret accounts in Liechtenstein and, overall, hid as much $20 billion belonging to US citizens. … UBS is extremely vulnerable to losing their license in the US.”  C1 Considering the contents of this newsletter as well as investigations of Federal Prosecutors, we cannot see how UBS will be allowed to do business within the United States. We can see only massive donations to Washington political operatives will resuscitate UBS international banking within the US.

UBS aggressively solicited and successfully enrolled a UBS Client senior citizen domiciled in Palm Beach, Florida. It is alleged UBS purposely confuses senior citizens by manipulating between UBS Bank, UBS USA, UBS Financial Services, UBS Wealth Management, UBS AG and various other affiliations. This is called “crossover” within the banking/broker dealer trade and is held unethically suspicious. These actions have allegedly been highly advantageous and profitable to UBS at the detriment of harvested UBS client senior citizens, especially with dementia. 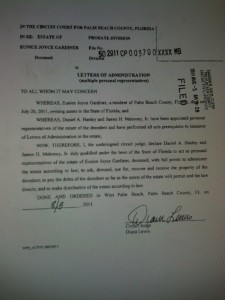 Eunice Gardiner died July 26, 2011.  Judge Diana Lewis of Palm Beach County Courthouse August 5, 2011 signed James H Mahoney Jr and Daniel A Hanley as “duly qualified” personal representatives of Eunice Gardiner’s estate.  From information and belief Mahoney/Hanley deviously did not divulge many issues precluding them from being “duly qualified”.  Judge Lewis was not told that UBS salesman Mahoney solely handled all of  Eunice Gardiner’s investment portfolio.  Controversial Daniel Hanley   used  his home address in the Eunice Gardiner Court documents avoiding mention of his position as a  Gunster Yoakley wills trust lawyer dealing with  Eunice  Gardiner’s  will.    This creates a facade against any Court record scrutinizing  eyes. Like most Florida Judges, we have found Judge Lewis a highly competent Judge with a large docket of cases.  Customarily,  if there are no opposing parties Judges do  have to scrutinize cases in depth.  Unfortunately, the Mahoney/Hanley appointments started a causal chain of  suspect events leading to the alleged looting of the $147,000,000 Gardiner’s Island Family estate. 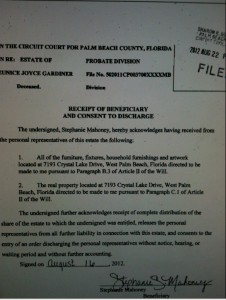 EUNICE GARDINER’S UBS SALESMAN’S WIFE IS MADE BENEFICIARY OF ESTATE HOME AND CONTENTS BY HUSBAND AND GUNSTER LAWYER AS EUNICE PERSONAL REPRESENTATIVES!

UBS has committed blatant conflict of interest if not criminal taking advantage of an elderly drug addled Eunice on her death bed.  From information and belief Eunice was being given medication several times the power of heroin.   This is further compounded with  UBS, a UBS salesman and his family isolating as well as  controlling Eunice the last months of her life.   James H Mahoney even spent the last hours at the foot of Eunice’s deathbed.    We see above that Stephanie Mahoney was given ownership of Eunice Gardener’s estate and contents  by trustees UBS salesman and husband James H Mahoney and  Gunster Yoakley lawyer Daniel A Hanley.  We see that these two men were appointed Eunice Gardiner’s “duly qualified” personal representatives  by Gunster lawyer Alexander Woodfield.  Eunice’s UBS salesman James H Mahoney’s wife even own  Eunice Gardiner’s death bed and perhaps ghoulishly sleep in it.

International Herald Tribune reports: “UBS was the figurehead of Swiss business. … Thomas Minder, a local attorney and shareholder activist, was even more outraged. ‘What happened here is a scandal,’ he thundered. ‘You’re responsible for the biggest loss in the history of the Swiss economy.  …  At that point, Minder charged the podium, only to be dragged away by security guards. … ‘People now question UBS’s ability to manage risk and judge just what a conservative investment is,’ said Dirk Hoffmann-Becking, an analyst with Sanford Bernstein in London.”  C2  Unfortunately, UBS is attempting to placate Swiss investors through the use of deceptive financial and banking practices.

ABC News reports: “UBS appears to have been particularly aggressive in the way they marketed their activities in the US.”  C3   UBS has caused a reign of terror against US citizens, especially the elderly through deceptive practices.

Financial Times reports: “UBS prepared investors for a heavy fourth-quarter loss as it warned of weak markets and one-off accounting factors linked to the value of its own debt. The world’s biggest wealth manager – and one of the biggest casualties of the credit crisis – did not issue a specific profits warning on Tuesday. But John Cryan, chief financial officer, said exceptional factors, alongside difficult markets, could prompt a hefty loss, in spite of the group having cut costs, reduced risks and shifted toxic credits off the balance sheet.” C4  UBS CFO Cryan has become the UBS voice of doom. We now see him blaming incompetence on “exceptional factors”, whatever that means. He is running out of ethereal entities to blame.

Bloomberg reports: “Mexico’s Peso Stuns UBS With Biggest Drop Since 1995 Zurich-based UBS, the world’s second- biggest foreign-exchange trader, by surprise. The bank forecast in November that the peso would strengthen to 12.5 by year-end. Now, UBS says the peso will fall as low as 15 by Dec. 31 as Latin America’s second-largest economy shrinks. C5  UBS has been consistently wrong in their prognostications and use bailouts from Swiss and US taxpayers to make up part of the difference. They give some of the money back to the political operators who gave them the bailouts.

UBS CLIENTS LOOSE MONEY BECAUSE OF SCHEMERS AT THE TOP

Financial Times reports: “UBS on Tuesday announced the highest loss in Swiss corporate history as Europe’s biggest casualty of the credit crisis said it lost nearly SFr20bn ($17 €13.2bn) in 2008. The loss, which was above market expectations, was swollen by a SFr8.10bn loss in the fourth quarter, and came in spite of a surprise SFr1.73bn tax benefit and a reclassification of assets that allowed the bank to avoid recognising a further trading loss of about SFr3bn.” C6  UBS scheming hierarchy  use the timeworn ploy of blaming everything but themselves for UBS losses. The UBS hierarchy is to blame for UBS criminal conduct and resulting losses, plain and simple. 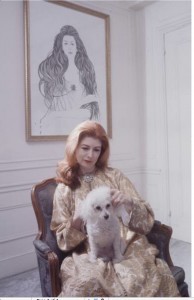 Financial Times reports: “Fourth-quarter earnings will also be affected by a complex accounting requirement linked to the asset transfer to the central bank, resulting in a loss of up to SFr4bn. Mr Cryan (UBS CFO) also noted that UBS could face a charge on the goodwill linked to its big investment bank, which is being significantly scaled down.”  C7 The Swiss government has heretofore been known for its astute and conservative behavior, especially in banking matters. UBS is diluting this reputation, making Swiss banking regulations an international joke.

news release:
embassyofswitzerland.com
Honorable Rudolf Hostli, Vice Consul
Swiss Embassy
2900 Cathedral Ave, NW
Washington, DC 20008
Dear Sir:
Through the assistance of our reliable sources within UBS we have been successfully investigating a certain UBS malfeasance. We would like to know who gave the UBS Chairmen Weil office orders to “sanitize”  UBS USA mortgage department before Swiss government UBS bailout “due diligence” was circumvented? We wish someone within the government liaison to assist us or allow us to give information beneficial to the Swiss government and ultimately taxpayer. We believe the Swiss UBS stockholders, clients and taxpayers have a right to know before deciding what to do with their money commitment.
Cordially,
Embassyofswitzerland.com

ISN Zurich reports: “The Swiss government has bailed out UBS, the world’s largest manager of private wealth assets, with CHF 68 billion. As a result, hundreds of demonstrators protested against rip-off salaries last Thursday in Zurich’s city center and blocked the entrance of the UBS building. … For some, steeply rising salaries imply insufficient corporate governance of big corporations where managers can largely define their own salaries at the expense of the shareholders. … The situation looks different however, if the incentive system in place in the end results in the taxpayer having to make up for a bank’s failure.” C8  This is further erosion of Swiss values replaced by Americanized banking practices.

Reuters reports: “Two former clients of UBS AG were sentenced on Monday to a year and a day in prison … The couple pleaded guilty in 2011 to filing a false income tax return. From 2004 to 2008, they failed to report interest income from millions held in offshore accounts, falsely deducted bank transfers and under-reported income, prosecutors said. … the couple took steps to keep their offshore holdings secret after the investigation into UBS became publicly known. The tax returns in question covered both individual income and the couple’s income from two corporations” C9 UBS is sacrificing the High Net Worth UBS Clients to the US IRS. This makes it look like something is happening when in fact the UBS offshore wire transfers continue, among those with UBS special relationship status, the Ultra High Net Worth. It is a game to all but the UBS victims.

Reuters reports: “Three former UBS executives helped deceive U.S. cities and towns by operating a scheme to rig bids to invest municipal bond proceeds, a federal prosecutor said on Monday at the start of the bankers’ criminal trial in New York. The U.S. government has a 10-year window to bring criminal charges over suspected crimes that affect financial institutions. In this case, since the three bankers were charged in December 2010, the case falls within the statute of limitations, U.S. District Judge Kimba Wood has ruled.” C10  UBS has never been prosecuted under the Obama Administration for their criminal activities. Among others, UBS pays a small fine and big donations to Obama, Basel Art Show and Utah Symphony as the price of doing dubious US banking business.  Oh yes, US Attorney General Holder and  Lanny Breuer past Assistant Attorney General “who had balked at criminally prosecuting UBS over Libor because, he said, ‘Our goal here is not to destroy a major financial institution.’ … ‘But when the attorney general says, ‘I don’t want to indict (UBS) people,’ “(see issue 1).  These statements and UBS donor insinuations leave little to the imagination.

Seniorsavior.com
Those bastards ruling UBS should be put in prison. I hope Obama sticks it to em. UBS has had a free ride with Bush and his cronies and now it is payback time. Great work and keep it up.
SM, New Jersey

Dear Editor:
I know some of the guys who got caught in bed with UBS off shore accounts. I heard UBS was running a honeypot out of the Basil art show in Miami. UBS brokers were selling off shores. We didn’t know UBS was doing nasty Utah stuff in Utah as well. That’s Mitts territory. Will Mitt also allow UBS criminality because of UBS Utah Industrial Bank cartel membership? By the looks of things UBS has all presidential bases covered.
Sid B from LA

We have seen UBS Client’s have had a difficult time with UBS. There are allegedly tax lawyers galore representing UBS clients.  Perhaps our investigation will bring more to the fore.  We can only watch the Gardiner’s Island Family estate scandal unfold before our eyes.  We do know one of the most lucrative criminal enterprises in the World is the isolate and control, dupe and loot scheme of UBS against Florida elderly living off of their life accrued assets.   We now see Gunster Yoakley appointing controversial wills/trusts lawyer Daniel Hanley as Chairman of the newly created Gunster Wealth Management.  How is this allowed by Florida and US  financial regulators?  We do know Florida government treats predatory practices against senior citizens very severely.  UBS is allowed to predate upon US elderly because they had the Obama get-out-of-jail-free card.   UBS has the Orwellian “UBS Americas Fund for Better Government” PAC and the Obama Presidential secret numbered offshore accounts to facilitate anonymous gifts to the Obama Library+.  We will continue to investigate these matters to gain transparency.